On 26 March, students, parents and staff at SISHK were introduced to Joey, the equine star of the award-winning play, Warhorse. Based on the best-selling novel by Michael Morpurgo, Warhorse tells the story of one horse’s experiences in the First World War.

Morpurgo himself never believed his story could be staged. How, after all, could Joey, who is practically the show’s star, be brought to life on stage? But the cast of Warhorse and especially the Handspring Puppet Company of South Africa, have created an amazingly life-like Joey. The show’s publicity team travels around the world to introduce people to the secrets that bring Joey to life – and Joey himself.

When Joey first trotted on-stage, led by his apparent ‘handler’, actor Shaun McKee who plays and controls the horse’s head, Joey’s movements were incredibly life-like. The secret to Joey’s natural physical movement is the combined effort of the actors playing the ‘Head’, ‘Heart’ (Joey’s shoulder and chest area as well as forelegs) and ‘Hind’ (Joey’s rear torso and hind legs). Through training and cooperation on stage, each actor knows when to make small movements individually, paying close attention to whatever the other two are doing.

It is tough work for the two actors who play Heart and Hind. “Joey is not a light puppet to bring life to,” said Michael Taibi, who plays Joey’s Heart. “His whole weight is on our shoulders and our hands operate levers with a system of bicycle brake cables.”

“The decisions that all three actors make ‘on the fly’ determine Joey’s character,” said Derek Arnold who plays Joey’s Hind. “This means that when a member of the team is changed, Joey’s character can change a little too,” said Shaun McKee (Joey’s Head).

On stage, the three actors are always visible to the audience. Dressed like farmers at the beginning of the 20th century, they do not seem to be out of place when standing near Joey or when their legs are visible beneath his body. In action, they bring Joey to life so much that they seem to disappear as all attention is placed on Joey.

In watching a play or a film, we need to suspend our disbelief and submit to a shared imagined reality. This is also true for Warhorse. But the skill with which Joey is brought to life will quickly make you forget he’s just a puppet. And his personality will help you understand Albert’s love for him – and why you might just want to pat him and give him an apple. 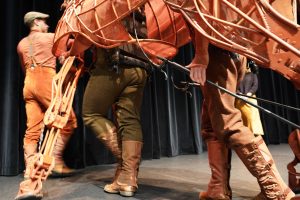 Joey on the move – you will hardly notice the actors bringing him to life. 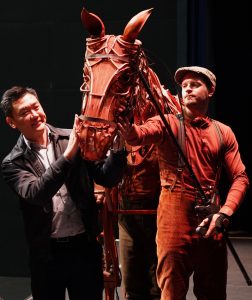