This year the u16 girls’ basketball team competed in the ISSFHK 1819 basketball tournament and achieved second place in the silver division. This article outlines the challenges the team faced throughout the season, as well as how they overcame their fears/ obstacles.

Firstly, we would like to highlight the positive mindset and the passion for basketball all team members had towards trainings and games. Instead of solely focusing on results of games, players prioritized the implementation and execution of strategies that they learnt and their performance both personally as well as that of the teams. Towards the end of the season, trainings were often voluntarily prolonged as players wanted to strengthen their game play with the help of the coach.

Although the team was relatively small, players trained hard and requested for extra training during recess and lunch so they could come together as a team and practice new strategies and learn how to defend against other teams’ different attacking formations. Here are some examples of the drills that we do during trainings:

Throughout the season, the team learnt the importance of teamwork and communication. Basketball is a team sport and hence requires everyone to work together on both offensive and defensive ends of the court. During time-outs, our coach instructs us on what strategies we should implement in the coming periods. We have set formations that we have learnt from trainings, and players shout out the formation in order to reset into their positions and execute that game plan.

In addition, the team also has formed strong bonds on and off court which makes trainings much more enjoyable and joyful. Before games, our team has a ‘ritual’ to join together in a circle and give each other words of encouragement and to hype up the team for the game. This has helped the team to calm any nerves and remind them that results aren’t the only thing that matter and to work as a team no matter what happens on court.

Overall, the team would like to express our gratitude to all teachers who helped us – Ms. Wong, Mr. Webber, Mr. Wojewnik and the coach for supporting us throughout this season. 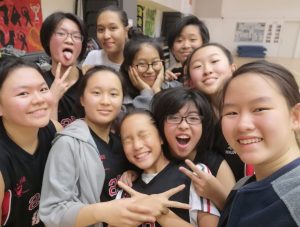