On the weekend of the 29th-31st March, the 33rd Silver Jubilee District, Singapore International School- Hong Kong Cub Scouts completed an overnight camping experience with many other Cub Scout Packs and Scout Troops at the Ma Tso Lung Campsite in Kwu Tung, North District, New Territories. Many of us had never been camping before, let alone join other experienced Packs and Troops, but when it was time to strike camp many of our Cubs did not want to leave.

When we arrived on Friday, we found ourselves at an empty campground – apparently we were the first ones to arrive! This meant we had extra time to set up and plan our tent arrangements. We made a rough circle with the entrances of our tents all facing our central ground sheet for communal eating. The Cubs certainly enjoyed our first meal – pizza trucked in all the way from Mong Kok!

As you can guess, the Cubs were very excited on the first night. In addition to the first round of games like Capture the Flag and seeing the older Scouts go hiking in the night, for many it was the first time to sleep outdoors. The excitement meant quite a few Cubs finally got to sleep much later than usual, and some neglected to secure their tent flaps resulting in a wake-up hello from the local frogs. The rest of us found out at 5am that a nearby tree was home to a very loud bird. This at least helped us get an early start on breakfast. 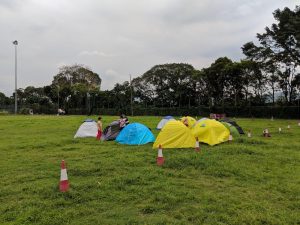 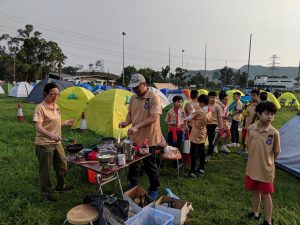 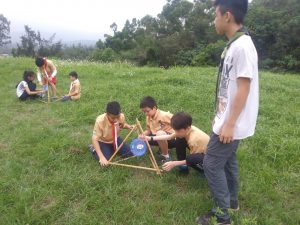 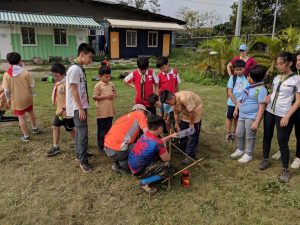 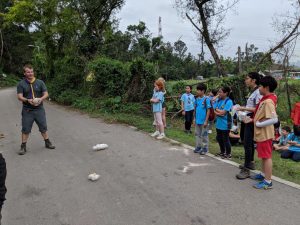 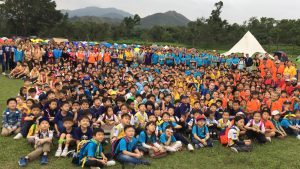 Before we arrived, Cubs had been sorted into three groups, who joined up with other Cub groups to form a mixed squad led by a Scout. This squad then went around the campsite playing games and taking part in activities meant to foster teamwork, planning and quick thinking. This lasted all the way from early morning until late afternoon, with a break for lunch in the middle.

At the end of the second day, dinner was cooked for us by another Scout Group and eaten in our tent area. After washing up, we made our way over to the bonfire for songs and stories, From 8:30 onwards it was free time until lights-out. Many of our Cubs had by this time become friendly with the children in the adjacent tent grounds, and it was nice to see different Scout Groups intermingling and having a good time together.

As this was our first time in a while attending a District Camp, we left early on Sunday. Many of our Cubs complained about having to leave early, so we know that the camp was a good experience for them! We’re looking forward to next year’s camp already. 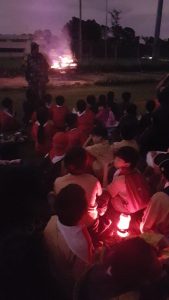 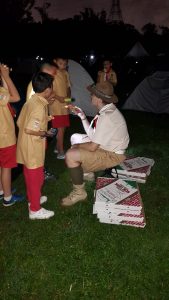 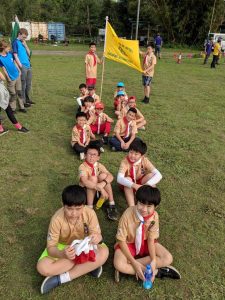 One thing we noticed was that many of the other Cub and Scout groups have many parent volunteers in attendance; indeed, the Pack next to us from Discovery Bay had hot chocolate and muffins for breakfast brought by the parents! For some upcoming events and next year’s Scouting structure at SISHK, we hope that we can emphasise the need for parents to volunteer (like all Scout leaders) their time and take the General Information Course to enter the world of Scouting. Some school-affiliated Scout Groups even make it a requirement for parents to become Scout Leaders, which makes for successful camping experiences. Remember, the aim of Scouting is “to encourage the physical, intellectual, social, spiritual and aesthetic development of young people so that they may take a constructive place in society as a member of their local, national, and international community.” We can only accomplish this together with you.