On 1st April 2019, the P4 students went to the Hong Kong Museum of History for the Social Studies Learning Journey. Each student had been paired up and handed a booklet to complete during their museum visit.

We first began our visit in Gallery 5. The first thing we saw upon entering the gallery was a statue of Lin Zexu, an important figure of the first Opium War. Lin Zexu’s goal was to stop the British from smuggling opium into China. He confiscated thousands of chests of opium and burnt it. To retaliate, the British sought out the Chinese emperor for negotiations however, talks did not go well and tensions continued to build. In the gallery, we saw opium chests, weapons, and important documents showing the defeat of the Chinese. We also watched an insightful video about the opium war in the mini theatre.

My favorite gallery was Gallery 6. It is a street filled with shops from many years ago. We walked past the many stores like a grocery shop, a clothes shop and a photography shop. It made me think about how different life was back then. Nowadays, shops have air-conditioners instead of fans and an abundance of choice when it comes to things to buy. Back then, shops were very small and sold basic products such as rice, sauces, etc. I was especially interested in the cameras our ancestors used, as they were big and bulky unlike the ones we have today. Now, we have features like autofocus. 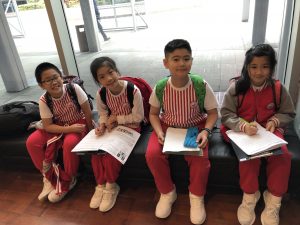 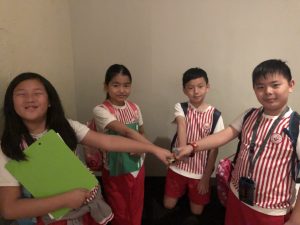 In Gallery 7, we got a closer look at life under the Japanese occupation. We saw Japanese military notes that Hong Kong people had to use as money. There I learnt that the military notes back then did not have any serial numbers on them. I wondered how the bank could keep track of their bank notes.

Before long, we had to leave the museum for the bus ride back to school. I thoroughly enjoyed learning about Hong Kong’s history. I learned how difficult our ancestors’ lives were and that we should appreciate the comforts we enjoy everyday. I would like to thank the parent helpers and teachers for taking us to the museum and look forward to future learning journeys in the years to come.