This past 3 weeks, I have been in Cyprus competing in the Optimist World Championship. In total, 264 boats competed in the championship. The weather in Limassol, Cyprus was sunny with minimal clouds and temperatures that ranged between 25 and 35 degrees. I went with the Hong Kong team who consisted of the top 5 Hong Kong sailors. In the first three days in the competition, we completed the qualifying series, which determined which final fleet I would be in. There were four fleets, Gold, Silver, Bronze and Emerald. Gold fleet was the highest tier, while Emerald was the lowest tier. 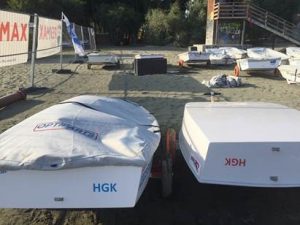 After the three days of qualifying, there was two days of team racing. Team racing is a race in which 4 boats of each country go against 4 boats of another country. The country that wins is the country with the least amount of points. If a team loses 2 times, then they are eliminated. Although I was the substitute, I supported my team and learnt from their mistakes throughout the three races. We went against the Turks, Ecuadoreans and Swedish teams. We lost to the Turks and Swedish. After the two days of team racing, we did another 3 days of fleet racing in our determined final fleets. I ended up last in Silver fleet after the first day of finals. Although it was not a very high rank, I was satisfied with my result as it was my first World Championship. On the last day I did pretty well, my results helped me earn four positions. In the end of the regatta, I ended up 63rd in Silver fleet. It was a great position for me as I believed I tried my best and gave it all my effort. I look forward to the next World Championship in Antigua.