“Always approach music with an open mind and be ready to learn from the people around you.”

As a passionate music lover since his teen years, our young alumnus Benedict Koh is pursuing his music studies at Berklee College of Music, the world’s preeminent college for music education. His academic journey in music was shaped by initial steps taken at SISHK.

“People call me Ben and I’m from Singapore,” he says.  “I first joined the school’s orchestra as my CCA in Secondary One. At that time, I had no prior music background. It was through the CCA where I got to see how the orchestra functions and how music gets created through combining sounds and instruments together,” he noted. “This fueled my curiosity.”

Ben plays the double bass and is now in his 3rd year of college. “I am doing a double major in Composition and Jazz Composition. They both focus on composing music. The difference between the two is that in Jazz Composition major, the classes focus on writing in the style of jazz like big band music as well as extended harmony classes which are very applicable to a lot of popular music. Composition classes pay more emphasis to classical composition, particularly contemporary classical music.” Ben explains.

Going to Berklee itself is an eye-opening experience for Ben. Being able to be under the tutelage from the best in the industry is such a privilege and it provides him the opportunity to learn from the best. Working alongside young, talented and diverse musicians is the perfect chance for him to understand different cultures and musical backgrounds.

Students at Berklee produce, direct and perform their own shows. “I was blessed to have such an opportunity to do so during my first year in college.” He recalls.

Just like many musicians, Ben has to sacrifice time and mental strength when pursuing greatness. “Many performers practice a lot to achieve their goals and they spent tremendous amounts of time on practicing. For composers, we also do take a lot of time to process and write our music but it’s also a mental thing as well. Sometimes we have to be able to come up with multiple originals in a week and the creative juices really sometimes don’t seem to work when you need them to.”

Ben recalls struggling but he never loses his motivation. He takes inspiration from going out, exploring and observing the happenings around him which help him with the writing process.

The music and film industries often crossover, with talented musicians lending their creativity to make movies. Ben composed the score for the short film “Epilogue”, which has been featured in a number of film festivals worldwide. “It started off when a good friend of mine, Nathan Wang (who is also an SISHK alumni), pitched an idea for collaborating in a short film. We worked with several other school alumna and we began production. After reading the script and having heard the inputs the director and producer, I subsequently did some research and went to produce the score for the film,” he says. “It is a love story set in 2020 Hong Kong. My friends were very inspired by Wong Kar-wai here.” 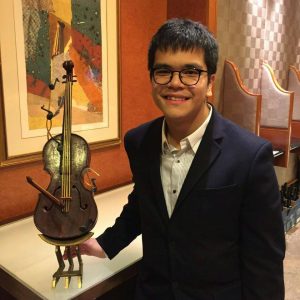 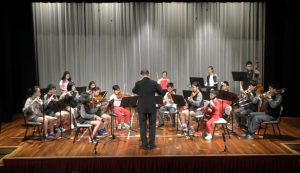 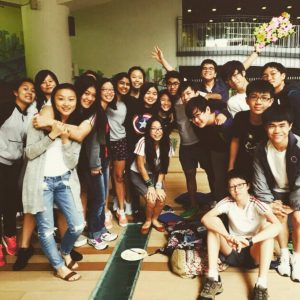 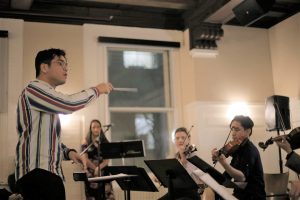 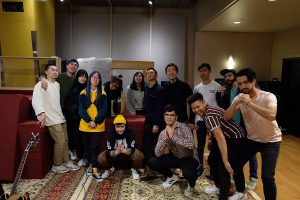 Ben has been actively involved in various student performances. Here are some of their productions.